A cross-platform game with the same rules as Scrabble that can be played locally
(on the same device), or against another device via data-SMS, Bluetooth and the internet.
Start games via an invitation sent by email, SMS, or Bluetooth, or if somebody's nearby
have them scan a QR Code.

Drag letters onto the board next to other letters to
make new words; press the number on the right of the screen to commit your move
and let the next person move. An English wordlist is included but there is a
link to the website to download wordlists to play in other languages.

The source code supports push messaging via Google Play, but that won’t function
in this build even if Google Play is installed. It just means that moves won’t
be transmitted quite as quickly as if it were supported. Play via SMS or
Bluetooth is unaffected by this. 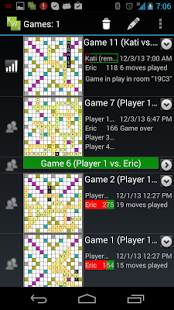