This Latin to Cyrillic (Latinica to Ћирилица) transliterator converts a text based on the Latin-script to a text based on the Cyrillic script and the other way around. Supports the Serbian Azbuka, Russian (ISO 9:1995) and 5 more alphabets. But the conversion table is also extendable/completely customizable with the characters of your choice

Supports two different layouts:
-Latin and Cyrillic text side by side
and
-Single text field with auto-detection of text type


More features:
-The converted text can automatically be copied to the clipboard.
-All letters currently used for the conversion can be seen in a summing up
-Remembers inserted text even if you close the app and reopen it
-You can customize the alphabet of your choice or even build your own conversion alphabet from scratch
-Dark theme support - choose between light and dark theme 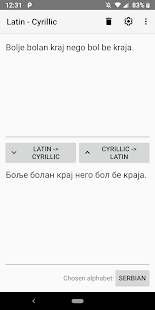 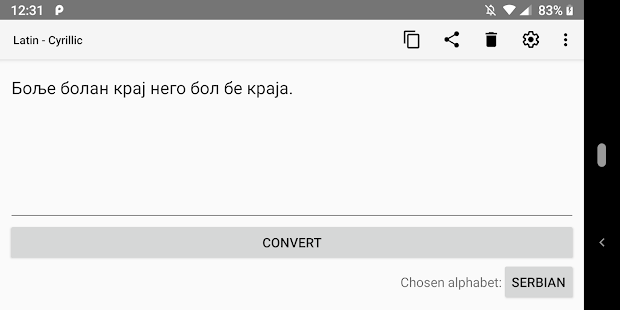