A Morse code keyboard, specifically designed for phones with small screens and
slow CPUs. DotDash uses "untimed" Morse code so that CPU lag or stuttering won’t
interfere with input. With DotDash you can touchtype, error-free, on most
Android phones.

1. Type a letter by entering its series of dots and dashes 2. Press Space to end
a letter and move on to the next one 3. Press Space twice to insert a space
between words 4. Press Delete to clear the letter in progress, or delete the
last letter typed if there is no letter in progress 5. Type the symbol ".-.-"
for the Enter key

DotDash keyboard includes a Morse code cheat sheet, which can be accessed by
swiping up off the keyboard. It includes the standard English Morse code
alphabet, plus custom expansions to encompass most of the keys on a standard
QWERTY keyboard.

Additional features are available in the OS’s keyboard settings screen (under
"Language & Input" on most Android versions):

* A utility keyboard with non-Morse characters and arrow keys, accessible by swiping to the side
* Toggle auto-capitalization on or off
* Change the "Enter" symbol between ".-.-" and ".-.-.." 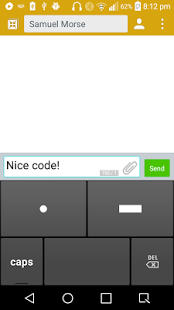 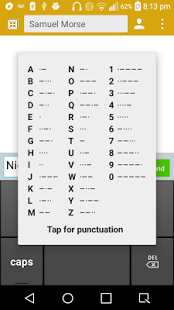 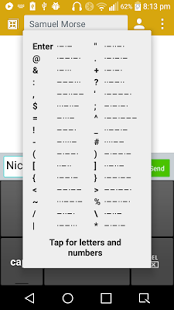