# What is this app

G-Droid can browse the libre F-Droid app-repository. It is an alternative to the official client.

* Shows reviews and comments for apps
* Star ratings of apps (up to 5 stars) - machine generated metrics
* Shows the star upstream star ratings (GitHub, GitLab, SourceForge)
* More metrics, based on libre data (like average release cycle time) to generate star-ratings
* Users choose which metrics are important to them, so there is no 'best app' in the repo - there is only a 'best app' from the point of view of the current user
* Shows 'similar apps' and 'apps of the same category' when watching an app
* Shows 'apps of the same author' when watching an app
* Shows a list of all authors, with their apps and average star rating
* Shows website of the app - even if it is 'only a README file on GitHub'
* Shows newest apps and recently updated apps separated
* Shows cards in same size for better overview
* Provides a list-view as alternative for the cards (as in older F-Droid versions) for people who don't like cards
* More possibilities to order and sort apps
* Ability to 'star' apps to mark them
* Ability to hide apps to remove them from all views
* Shows categories in correct translation (if available), after changing device language
* Shows screenshots in correct translation
* Makes use of larger screens: More apps shown on tablets
* Tags to find apps for standard-tasks easily (e-mail clients, file browsers, text editors), since the F-Droid categories are too broad
* View for 'random apps' to discover apps you usually wouldn't find
* Shows apps the user might like (without stealing user data for analysis)
* Aims to provide many different views to the app repository in order to assist the user in finding suitable apps, and encourage use of more apps from the repository
* 'Share' apps so it can still be opened with another store (F-Droid, Yalp, Aurora, …), to get more info about the app.
* Different search algorithm, can 'search harder' to continue a search if the results are insufficient
* Shows the logos of apps all the time (if network connection is okay)
* Shows more screenshots
* Shows screenshots, completely, up-to-date and in the correct language
* Shows screenshots, also when they are not in the fastlane structure
* New and modern easily maintained codebase
* Actively maintained
* Many more to come

# Things G-Droid can NOT do (yet) compared to F-Droid

* Show or install an older version of an app
* Create a local repo, share apps with people 'nearby' or share apps via Bluetooth
* Add other repositories than the F-Droid repo
* Use the privileged extension (done, but extension is not adjusted yet), G-Droid can however use root permissions on rooted devices to provide unattended installs
* Automatic updates
* HTTP proxy settings
* G-Droid helps you in different ways to find better apps, but in some cases you might still need the 'share' button, to open that app in F-Droid to install it. G-Droid right now is not yet a complete replacement for the F-Droid app.

# Shared aspects of G-Droid and F-Droid

* Shows the same apps - G-Droid does not add any apps or modify the builds, signatures or download URLs
* All additional metadata is provided by F-Droid as well (e.g. the link to GitHub)
* GPLv3+ license

* INTERNET: To download the app-metadata and the apps
* WRITE_EXTERNAL_STORAGE: To store the downloaded apps temporarily (permission only enforced on older Android versions) 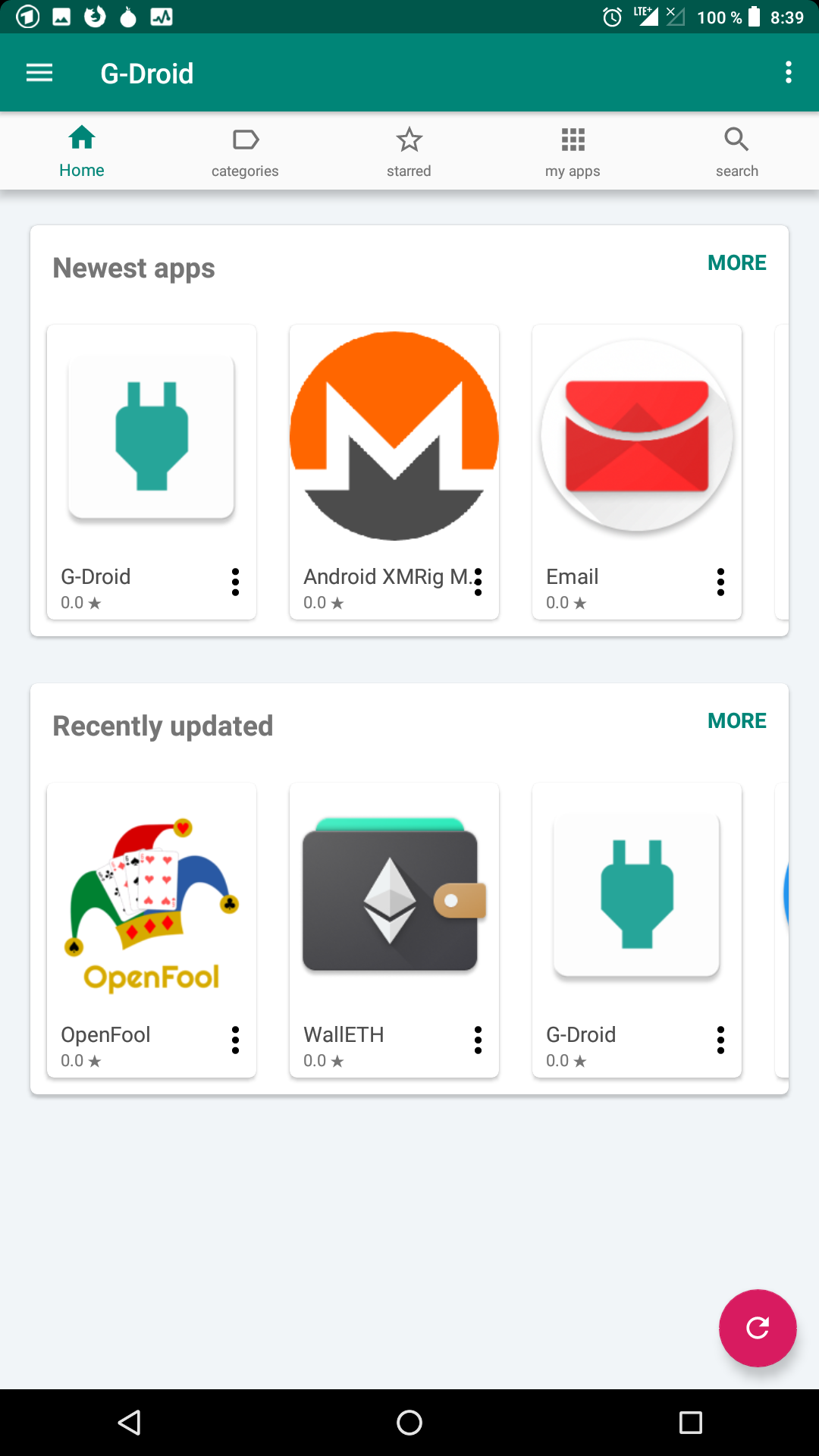 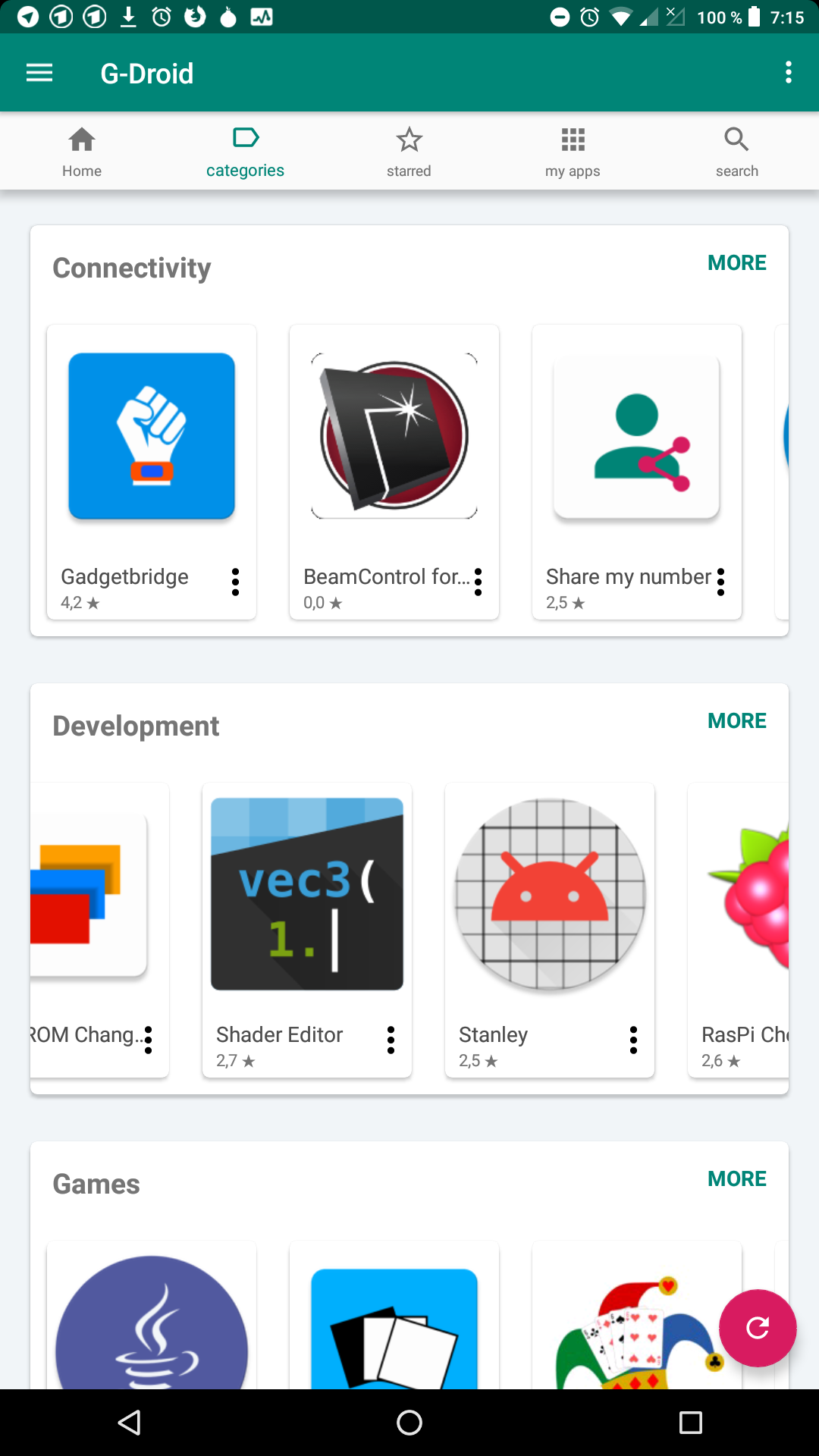 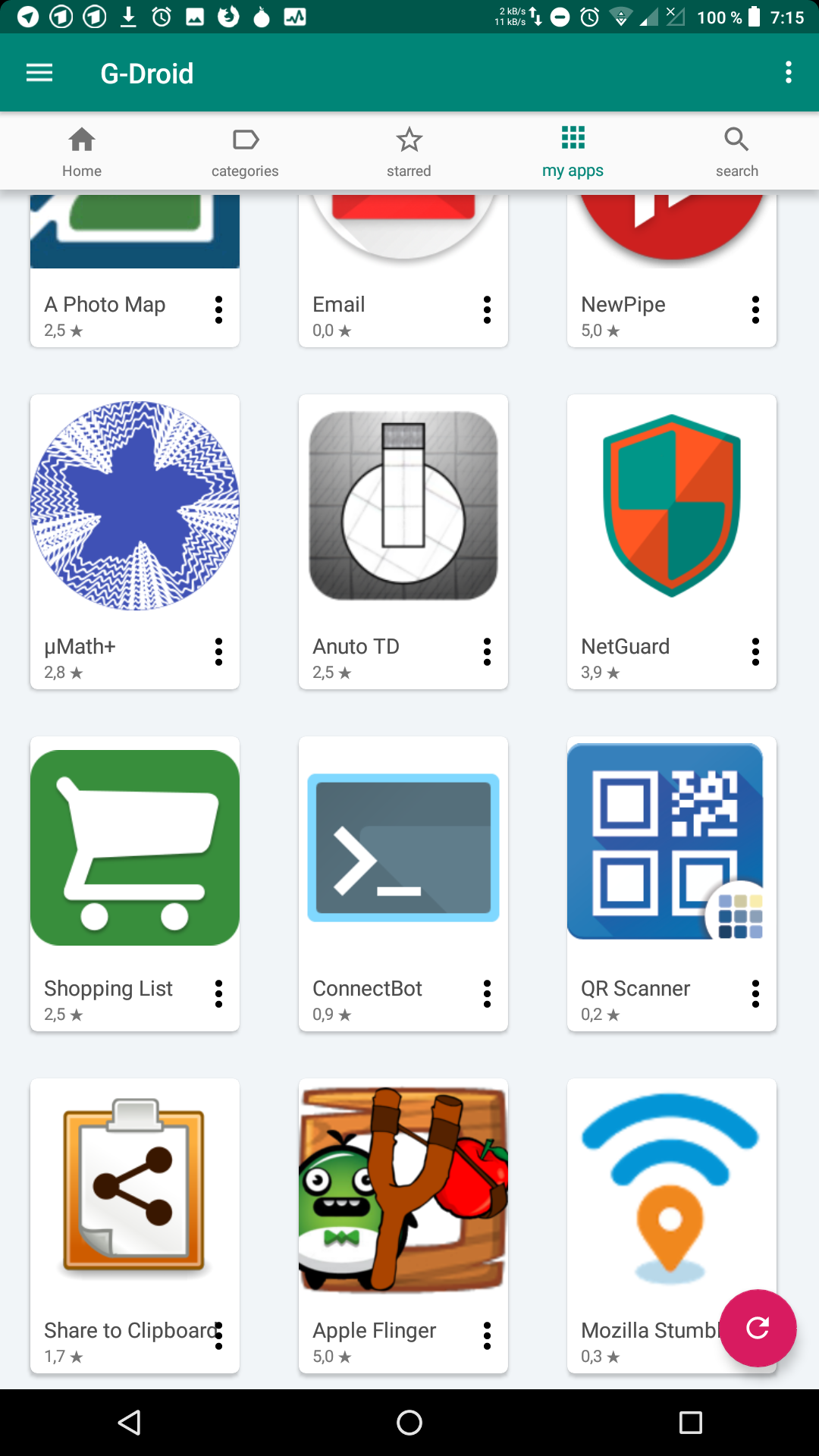