You are a lone outsider in a strange, non-Euclidean world. As a Rogue, your goal
is to collect as many treasures as possible. However, collecting treasures
attracts dangerous monsters (on the other hand, killing the monsters allows more
treasures to be generated).

You can kill most monsters by moving into them. Similarly, if the monster was
next to you at the end of your turn, it would kill you. The game protects you
from getting yourself killed accidentally by ignoring moves which lead to
instant death (similar to the check rule from Chess). 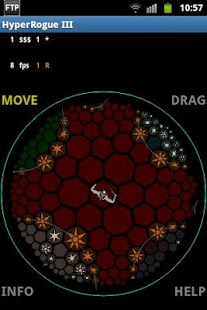