Have a secret that you want to share? Why not hide it in a picture? With
PixelKnot, only your friends with the secret password can unlock your special
message. Everyone else just sees a pretty picture. It’s a fun and easy way to
share hidden messages without anyone knowing. Take those pixels, twist them in a
knot, and see for yourself!

* DISGUISE YOUR MESSAGES: Pictures are public, the text is hidden inside. Even a trained eye will think the image is unedited. It’s security through obscurity!
* FOR YOUR EYES ONLY: Put a password on the secret message to make sure that no one can read it except the person it’s meant for.
* EASY IMAGE CHOOSER: You can use the camera to take photos, or just use photos you’ve already taken.
* INVISIBLE CHANGES: Even a trained analyst analyst shouldn’t be able to detect any message. The image bytes should seem undistorted.
* SHARE ACROSS PLATFORMS: Want to share the images over email, file sharing tools (like Dropbox & Sparkleshare), social media (like Google+ & Flickr) or directly through Bluetooth or NFC? Not a problem! The messages are still recoverable on the other side. We'll have even more tools (like Facebook) working soon, so stay tuned!
* AD-FREE: We want your love, not your money.
* MATHEMATICALLY SECURE: We use the newly developed steganography algorithm F5 which implements matrix encoding to improve the efficiency of embedding and employs permutative straddling to uniformly spread out the changes over the whole steganogram.
* ATTACK RESISTANT: We’ve launched attacks on images with messages hidden in them using a specialized version of stegdetect, an automated tool for detecting steganographic content in images. In most cases, the pictures have been impervious to attack. We will be including detection in an upcoming version of the application so you can easily test it yourself! 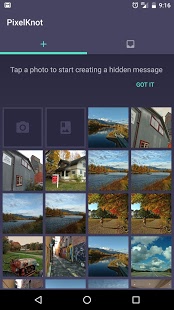 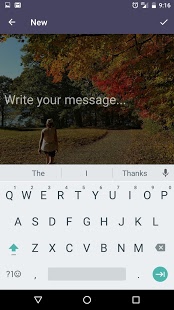 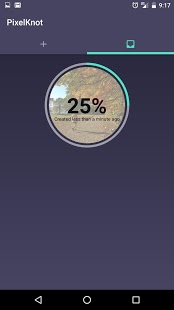